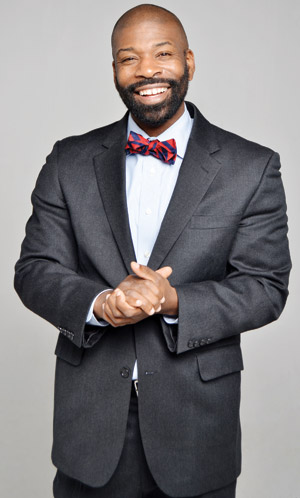 The focus of this month’s Orion Gives Back is Hattiloo Theatre.

Hattiloo, one of the few independent Black theatres in America, is a true jewel in our city.  We recently invited them to share their story with us, and are honored that Ekundayo Bandele, founder and Executive/Artistic Director, took the time to personally answer our questions.

Orion: We would love for you to tell us a story that will help our readers understand the impact you have in the Memphis community. Could you share with us one of your most memorable experiences surrounding a production (either with an actor or a theatre-goer) that would be an example of this?
Mr. Bandele: It was 2006. We were hosting dinners in the gutted out storefront on Marshall that would one day become the first home of Hattiloo Theatre. The dinners were catered and delivered by table by service. There was a 30-minute show. A tour of the space – where would the stage stand; where would the walls go up. We had about a dozen people at each dinner, and these guests, on average, donated $500. One evening, in the middle of dinner, an elderly black woman entered. I met her at the door and told her it was a private event. She excused herself but said that she wanted to leave something with me. She gave me an envelope and I opened it. It was a check for $126. Paper-clipped to the check was a telephone cut-off notice. I looked at her and she said, ‘I heard about what you’re doing. I heard about you. I went to Manassas with your daddy, Butch. He would be so proud of you. Keep on doing what you’re doing.’ She didn’t join us for dinner that night. I never saw her again.

Orion: Tell us how you got involved with Hattiloo Theatre.
Mr. Bandele: In 2005, I moved back to Memphis from New York City. Michael de Caetani, a philanthropist and supporter of local theatre, approached me about opening a Black Repertory Theatre – a theatre that focused on the works by African-American playwrights. Michael frequented a weekly event that I ran called ‘The Speakeasy,’ which was a mix-bag of performance ranging from opera to hip-hop. He also knew that I had a background in producing theatre. After much thought and getting advice from many people in the arts community I decided to open Hattiloo, which I named after my two daughters – Hatshepsut (Hatti) and Oluremi (Loo). Hattiloo became a non-profit in 2006 with Micheal as my founding board chairman. We rented a storefront on Marshall Avenue and renovated it into a 66 black box theatre. For the first few years, I only had help from volunteers; so I directed the plays, built the sets, sold the tickets, wrote grants, raised money, and even acted sometimes.

Orion: Hattiloo Theatre is now in its 9th year. Tell us about your biggest successes to date.
Mr. Bandele: Some people may say that the completion of our $4.3M capital campaign is our biggest success; after all, it did result in a newly constructed, debt-free building. But I say that our biggest success is our team; a staff that works together in unison and puts excellence and quality customer service first; and a board of directors who are engaged and committed to the sustainability of the organization.

Orion: What has surprised you most about working at Hattiloo?
Mr. Bandele: I am most surprised by the diversity of our supporters and audience. The make-up of our subscribers runs the gamut, that is, in race, socioeconomic class, zip code, age, gender, you name it – they come to Hattiloo. That’s the power of theatre, the allure of a public audience. While we are well aware of the many things that divide our community, I am pleasantly surprised that Hattiloo erases those divides, even if for just a moment, for just long enough for us to cry and laugh and applaud as one people.

Orion: What is your favorite play that Hattiloo has staged and why?
Mr. Bandele: The Bluest Eye by Lydia Diamond adapted from the novel by Toni Morrison. It’s my favorite because it was so layered. The script was powerful, and the cast was totally committed to presenting a story that was both beautiful and painful. It was our first time using a scrim – a piece of fabric that can seem solid or become see-through based on lighting. We had a melodic background from a live pianist. The set was beautifully painted and imaginative. For me, it’s a fond memory of watching all the pieces of a performance hit in good timing.

Orion: You have already made such a positive impact in our community. What would make it possible for you to do even more?
Mr. Bandele: I would like to help communicate that art and culture are two different things. I would also like to communicate that entertainment and live theatre can be similar, but its intent that differentiates one from the other – do you produce a play for an audience to escape reality for a few hours; do you produce a play for an audience to push themselves, to become more empathetic people. Memphians have a beautiful culture that is sometimes confused for a past-time – a short concert, a dance performance, a play, a poetry reading. But these events define who we are and where we live. I would like to play some kind of public role in helping Memphians identify themselves through the culture that artists living next door or across the street or all the way on the other side of the city are creating.

Orion: What do you wish other people knew about Hattiloo Theatre?
Mr. Bandele: I wish people knew just how great our artistic product is. People come and enjoy our plays; they comment on how great the acting was. But if they could measure us up to other cultural organizations across the country, many of which I have visited, they would see that Hattiloo goes the extra effort, spends the extra dollar, to create something that is exceptional.

Orion: What would you tell someone who is thinking about donating to or volunteering at Hattiloo?
Mr. Bandele: Everybody has a reason why you should support one non-profit over another. We’re all doing great work. What makes Hattiloo singular is our singular mission. Our plays are for some people a means of self-examination; and for others they are eye-openers. We exist to tell the stories that are sometimes skewed in the press, sometimes forgotten by communities, or sometimes overlooked – and we do it all at a cost that nearly every body can afford. We don’t charge for children to take classes at Hattiloo, because developing one’s imagination is a human right, not something that’s accessible to those who have parents who can afford it. We take free plays out into the community because not everyone feels comfortable in our space; they want to be in their own environment, with their neighbors, under their sky. We produce free panel discussion about issues that we think but don’t often talk about. And we make our Black Theatre Museum free so that we can see just how long the African-American has been an American, contributing to the cultural landscape of our great nation. We do all of this for you; even if you don’t see our plays, attend our panels, or live in the communities that we visit; we do it for your neighbors, your fellow Memphians. And so, we hope that you’ll join us, as we press the cultural bounds of everyone who dares to see more, become more. We can’t do it alone. We need everyone to take a leading role in the script that we’re writing everyday.